Lead Us Not Into Temptation

In a shocking, graphic expose, New Orleans journalist Berry documents scores of cases of sexual abuse of boys by Roman Catholic priests across the U.S. Tracking this tragic story from Louisiana to Washington, D.C., and then to New York, Berry reports that most child-molesting priests are simply reassigned to a different parish. He accuses the Catholic bishops of evasion and cover-up, compounded by moral myopia and an appalling indifference to the victims of pedophilia. He also cites cases of women seduced and discarded by their pastors. Further, Berry probes the homophobia within a clerical culture which, he maintains, allows ample freedom to gay clergy provided they keep their sexual orientation a secret. He describes the organized movements of women and men within the Church who are challenging the bishops’ silence. Berry ends with a plea to abolish mandatory celibacy for priests. Greeley, in his foreword, notes that sexual abuse “may be the greatest scandal in the history of religion in America.” 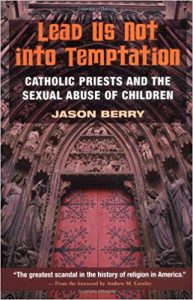