With Charles Evers in Mississippi

Amazing Grace is an absorbing account of the dramatic Charles Evers’ gubernatorial campaign in Mississippi. It is another story too; that of a young white Southerner who had the courage to jump right into the middle of it and the wit to write a very readable report of the adventure. 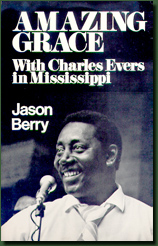