In May 1959, Louisiana Governor Earl K. Long had a nervous breakdown while battling legislators to preserve the voting rights of black people. Committed by his family to three mental hospitals in the ensuing weeks, he finally managed to free himself, only to plunge into a torrid romance with a Bourbon Street stripper calld Blaze Starr. His term ended in disgrace.

His last hurrah came in 1960: despite all the bad baggage, he won a Congressional seat in the Bible belt — and a bet on that campaign that yielded $24,000. Then he died. “Earl Long in Purgatory,” a play, opens in Earl’s afterlife and is a celebrated drama about the barn-storming populist’s ultimate campaign, arguing his case for the “holy escalator.” It also includes an historical essay, “The Madness of Earl Long.” 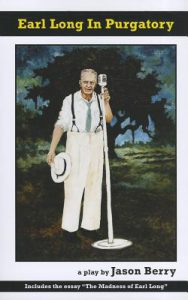